Nature's Solutions: how to lock up carbon & tackle climate change

Guy Dauncey explains how 'slow' forestry, building soil with organic farming, and rotational management, a part of carbon farming, can lock up carbon in the soil and tackle climate change

So here’s the carbon problem, in an organic walnut shell. Every year, we add 10 billion tonnes (10 gigatonnes, 10 Gt) of carbon to the atmosphere by burning fossil fuels, making cement and cutting down the Earth’s ancient forests.

This is mostly carbon that’s been stored underground for hundreds of millions of years, that we are releasing in a single splurge of industrial euphoria.

In the atmosphere, it is additional to the natural carbon cycle, which has been recirculating the carbon from plants, forests and ocean organisms for as long as they have been on Earth.

Before we started our industrial age adventure the atmosphere contained 560 Gt of carbon. Today, it has over 800 Gt, increasing by 5 Gt a year. The other 5 Gt of carbon are being absorbed by the ocean, causing it to grow more acidic every year, with ominous consequences for the coral reefs and other marine life.

We need to tackle the problem from both ends. We need to stop the flow of carbon from below by building a global civilization that can do whatever it needs without requiring any coal, oil or gas. That’s completely possible – we just need to get on with it.

And from above, we need to suck 400 Gt of excess carbon out of the atmosphere and bring it back to the soil and trees where it belongs. There have been various complicated proposals to do this, ranging from seeding the ocean with iron dust (which would make it even more acidic) to building synthetic trees that would convert the carbon into sodium carbonate, to be stored away underground in old oil wells.

Nature has been recirculating carbon for hundreds of millions of years, however, so it already has the solutions we need. We need to listen to the soil experts, not the oil experts.

In the forests, the older a forest, the greater is its capacity to store carbon. Best is to protect as much as possible as wilderness and parks, but where we do need to harvest timber, the longer the harvest rotation, the more carbon can be stored. In the Pacific Northwest, a 160-year rotation will store 590 tonnes per hectare, compared to 363 tonnes in a 40-year cycle. Compared to clear-cutting, variable retention silviculture in old-growth zones stores 111 more tons of carbon per acre. (All references are in my book The Climate Challenge: 101 Solutions to Global Warming, see www.theclimatechallenge.ca).

Globally, if nations could adopt a Forests Solutions Treaty designed to maximize carbon storage, the British climate scientists Tim Lenton and Naomi Vaughan found that the Earth’s forests could draw down 50 to 100 Gt of carbon by 2100.

Next, there is farming. The Rodale Institute has found that organic farming stores two tonnes more carbon per hectare than conventional farming, because organic farmers pay so much more attention to building the soil. If there was a global Organic Farming Solutions Treaty by which all farmers agreed to go organic on 1.5 billion hectares of cropland, this could draw down up to 30 Gt of carbon a year, or 200 Gt by 2100.

As a side benefit, they would increase their yields, eliminate the danger from pesticides and GM crops, grow much healthier food, restore wildlife and biodiversity, and earn more money. Not bad for a solution to one of the world’s biggest problems.

So finally, we turn to the Earth’s grasslands, which have been storing carbon for as long as animals have been grazing on them. Here the story is fascinating, for the real guardian of the grasslands carbon is the wolf.

When wolves are around, grazing animals cluster together for safety. In so doing, they heavily impact the soil and fertilize it with their manure, creating the perfect environment for seeds to take root – and the roots of prairie perennial grasses can go seven metres deep, storing carbon all the way.

When the wolves are killed, as farmers have done all over the planet, the grazers turn into picky delicatessen eaters, and never impact the soil – they just scratch and scuff the surface. The native grass seeds fail to take root, and the carbon is lost.

Restoring the wolves would be ideal, but when farmers and herders graze their cattle in a way that replicates their original behavior, keeping them clustered tightly through rotational management intensive grazing, the old patterns are restored and the carbon returns. Australian farmers call it carbon farming, and they’ve discovered that it also stores more water in the soil, making it a useful response to drought.

Globally, if the world’s grasslands farmers all did this on the world’s 3.4 billion hectares of grasslands, storing an additional tonne of carbon per hectare per year, they could draw down 350 Gt of carbon by 2100.

Taken together, these three methods could in theory draw down 600 Gt of carbon by 2100, which is much more than we need – and in practice, there is a limit to the soil’s biological ability to store carbon.

But it’s there, staring us in the face. We just need to pay heed to Nature’s solutions, and respect her wisdom.

You can read regular issues of Guy Dauncey'e EcoNews at http://www.earthfuture.com/econews/

Kelly D. Ware |
Thu, 08/03/2012 - 21:03
It is never "ideal" to reintroduce wolves to get ungulates to gather tightly together to help improve soil. The introduced wolves have severely reduced ungulate populations and kill ruthlessly without eating. 100 years of management to restore elk and deer in the US west are almost destroyed by 20 years of wolf reintroduction. Now the numbers of wolves are getting out of hand reducing the ability to "manage" numbers. (savetheelk.com) Teaching ranchers to do wholistic management or paddock shift system is the direction, God forbid there be more wolves, especially in YOUR woods. I suggest you take out the IDEAL wolf opinion from your article. 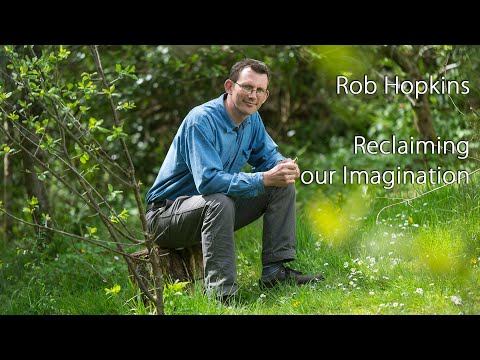 Reclaiming Our Imagination with Rob Hopkins

The Minimalist Gardener
"Minimalist gardening acts as a gentle ‘gateway portal’ into the wider realm of regenerative design, one of the most positive and empowering things we can do to help the planet and each other."

Inhabit: A Permaculture Perspective
An unmissable film showcasing how permaculture holds many solutions to the problems of today. From farms and smallholdings, to landscapes, communities and cities.
Advertisement
Advertisement