Buy Nothing Day 2012 is Approaching, Could You Stop Spending for One Day?

In the run up to Buy Nothing Day 2012 on Sat 24th November, Mark Boyle, author of The Moneyless Manifesto challenges you to take part in 'Buy Nothing Month' in 2013

It's a classic scene from The Simpsons. A flock of marketing executives sit around a large table in a boardroom; sales, they're told, are down in the third fiscal quarter, and they're the people whose raison d'être is to make the graphs head northeasterly again. They break out into discussion, before a cigar-smoking man, with deep furrows of concern in his brow, intervenes. He decides that they need to create a new day, and that it needs to be something “warm and fuzzy”. Cut to a new scene, where Homer is unwrapping his “Love Day” present, a talking toy bear called Sir Loves-a-Lot, whilst his daughter Lisa fills the rubbish bin full of Love Day wrapping paper.

Born out of the monetary economy's fundamental need to convert freedom into monetised activities, Buy Something Day has been sold to us under various, more palateable monikers: Father's Day, Sweetest Day, Valentine's Day, even Boss's Day (a day in North America when – you couldn't make this stuff up – employees thank bosses for being kind and fair). In the US the more sceptical have begun calling these “Hallmark Holidays” (referring to the American greeting card company), cynically suggesting that our honourable and skilled marketeers may be inventing these days merely out of the profit motive, and not for the common good.

How 'Buy Something Day' Became 'Buy Nothing Day'

One of the only “days” invented that hasn't morphed into a Buy More Meaningless Crap exercise is international Buy Nothing Day. Initiated in 1992 by the subversive magazine Adbusters, it has historically taken place on what is known as Black Friday in the US, the day the Christmas shopping season kicks off there, and on the following day in the UK. Its purpose, on the face of it, is to ask us to take one day off shopping of any sort. The day itself is symbolic – its real purpose is to help us to drastically reconsider our consumption habits on a longer-term basis.

Reducing our consumption, we are told, would be terrible for the rampaging beast known only as The Economy. But here is where the sleight of hand takes place. Politicians and economists have been conflating words relating to economy with words relating to finance for so long that we have come to think that economics is all about money.

Economics actually has nothing in particular to do with money; it's about how we meet our needs. The monetary economy is one model out of many, and is a very recent one at that. It's a model that seems intent on converting all our intimate human relationships into services to be bought and sold, whilst reducing the splendour and pageantry of the Earth into imperishable units of account. If we could instead meet our needs locally (or, as a transitional strategy, by utilising the mega-tonnes of stuff we've already produced), along with freeing ourselves from the desire to have bigger, shinier distractions, then why wouldn't we?

This question has become especially potent considering how easy buying nothing has become. As the monetary economy has continued its descent, the gift economy has boomed. Gift circles, guerrilla gardening, swishing (clothes-swapping) evenings, couch-surfing, Freecycling, Freeconomy, open-souce ecology and software, freeskilling, book-sharing clubs, forest gardening, scrumping apples to make cider to fuel free street-parties, skipping and squatting, Permaculture design, street freecycling, HelpX, WWOOFing and Freeshops make up a fraction of the myriad ways in which you can participate in the gift economy to some degree, all of which lie somewhere on the global-to-local spectrum. And millions of people are now figuring this out for themselves.

Credit must go, in part, to George Osborne, Christine Lagarde, Darth Vader, Angela Merkel and their ilk for their unintended assistance in the popularisation of non-monetary economics. Freeconomy, the alternative economic system I founded in 2007, has recently sky-rocketed in countries such as Greece, Spain, Portugal and Ireland, countries where the national currency has become almost as scarce as an honest politician.

There are now thousands of ways you can de-monetise every aspect of your life, to whatever degree works in your unique circumstances. In doing so, not only will you drastically reduce your ecological footprint, but you'll also rediscover your sense of interdependency with the rest of your local community and the land under your feet, for if money has come to replace relationships, that's exactly what you'll rediscover.

You'll also free yourself up from the financial imperative that forces many of us to do work that is a crime to the human spirit, liberating your hands and minds to do the work that your heart is calling you to do. Combine all these practical solutions with a bit of imagination, and – believe it or not – you could even live completely moneylessly if you so wished. If I have been able to, trust me, anyone could.

How to Take Part in 'Buy Nothing Day'

Given how widespread gift economics is becoming, I ask you to test the waters by joining me in a Buy Nothing Month in 2013. Pick a month, any month. January would be a perfect opportunity for all sorts of good reasons. Create your own rules. Make them realistic enough to be achievable yet challenging enough to be considered an appropriate response to the ecological and social issues we're confronted with.

Some of you may not be prepared to forage from the wilds or the supermarket bins, whilst others will get excited by the adventure of it. A few of you will be up for a completely moneyless month, whilst for others going moneyless in terms of travel or entertainment may be more appropriate. The point of it is to take stock of your consumption habits, and to see what areas of your life you can replace monetary transactions with real relationships. The extent to which you take it is up to you.

The worst that can happen is that you'll save a few quid. The best? You may realise what a little part of you already knows – that there is another way of getting rich than accumulating more material wealth.

Mark Boyle's new book, The Moneyless Manifesto (published under a Creative Commons licence) is out now and available from green-shopping.co.uk. A free online edition of the book has also been released on moneylessmanifesto.org 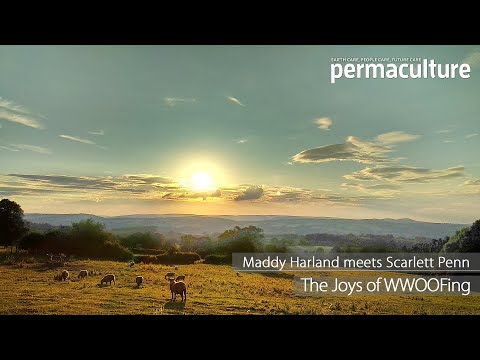 The Burning Answer
A user's guide to the solar revolution - and why we must all get on board before it is too late.

How to Read the Landscape
The late Patrick Whitefield's exploration of our surrounding landscape. Learn how to read hedges, woodland, fields, animal tracks and more as your eyes really open to your environment.